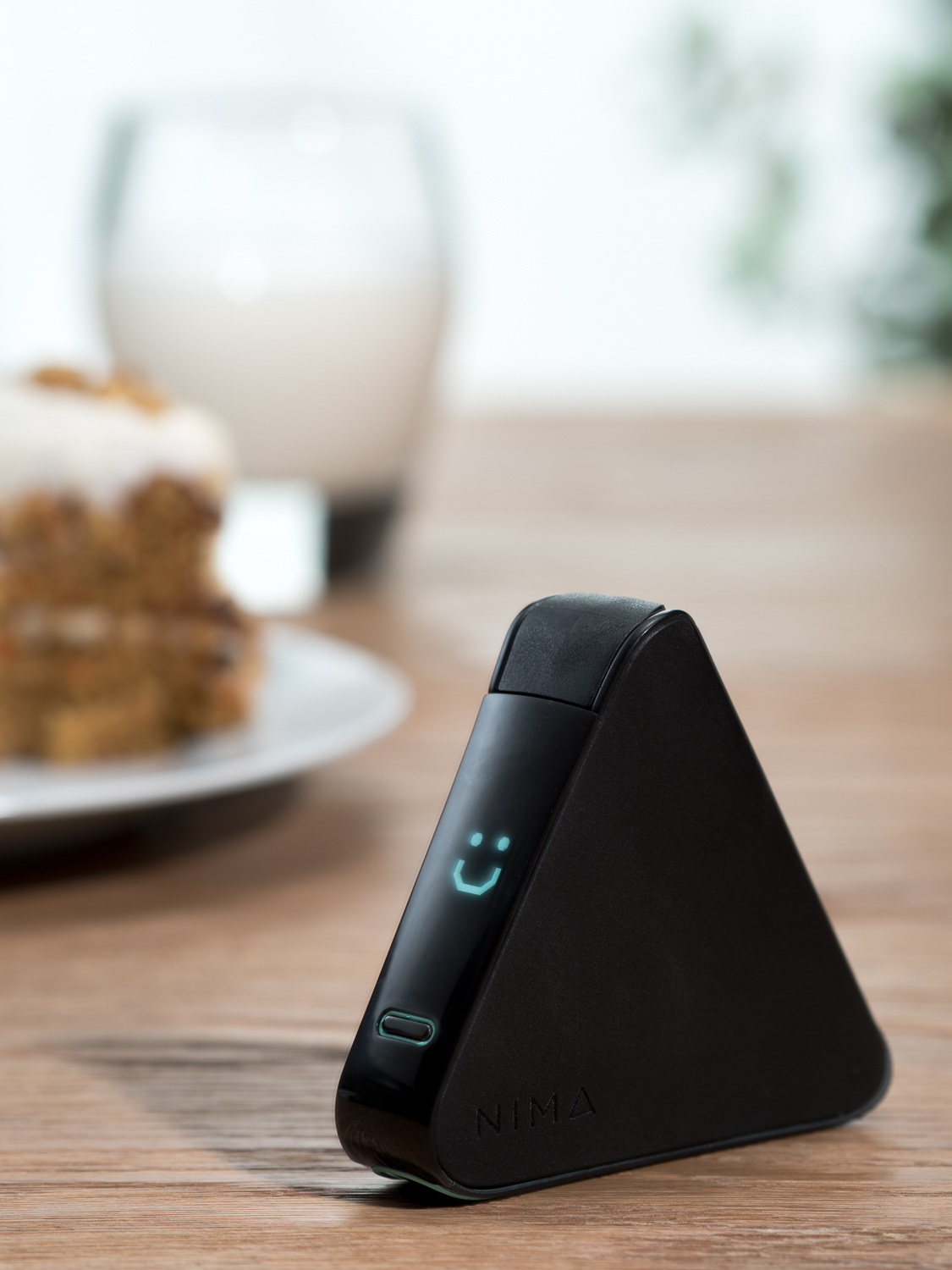 Growing food allergies have prompted many allergen-testing products, but most have been geared to the food manufacturers and testing on their production lines  rather than putting the power of allergen detection directly in the hands of allergy sufferers. But Nima — developed by Shireen Yates, who is allergic to gluten, soy, dairy and egg; and her former MIT classmate, Scott Sundvor, who avoids gluten due to his ulcerative colitis — is a transportable food-allergy detector, which in its first iteration can expose gluten content in food.

“I was tired of answering the same questions (and really hangry at the time). I just wanted a quick, easy way to test a piece of the dish and see for myself if it was gluten-free,” said Yates, speaking about the realization she had in the summer of 2012 after receiving lackluster food options from the waitstaff at a friend’s wedding.

In 2013, Yates and Sundvor came up with the idea for Nima (No. 17 on the inaugural CNBC Upstart 25 list of promising young start-ups). The duo won an MIT $100K Accelerate competition, helping to start the financing of the device.

Yates said a friend who accompanied her to the “epiphany” wedding, also an MIT engineer, was one of the few people during Nima’s three-year journey to market who believed it was possible. “Along every step of the way of researching, prototyping and building Nima, well-respected industry professionals told us we couldn’t make a gluten test faster, smaller or easier to use for consumers,” Yates said. “I kept asking why not until I was satisfied, and I wasn’t easily satisfied.”

According to Food Allergy Research & Education (FARE), up to 15 million people suffer from varied food allergies, and the numbers are on the rise. Ninety percent of food allergies arise from eight foods: milk, eggs, peanuts, tree nuts, fish, shellfish, soy and wheat.

Gluten allergies specifically, which have no cure or treatment options, have affected up to  3 million americans. On average, those who suffer from celiac disease — a gluten intolerance —incur an additional $10,000 in outpatient care. The gluten-free food retail industry has grown with a value of $2.79 billion.

The societal challenge Nima is tackling is one of the reasons it was chosen for the Upstart 25. Nima is currently working on detecting other food allergies, including milk and peanuts.

A Nima peanut sensor is expected to launch in the fall.

Professional lab kits designed primarily for the food industry can require up to 10 steps to accomplish the same results as Nima. The company’s device allows anyone to take a morsel of food from any dish, pop it into a one-time capsule, and within two to four minutes the device will report if the sample has any trace of gluten. It will light up with a green smiley face if there is no gluten, awheat symbol containing the words “low gluten,” or a wheat symbol containing the words “gluten found” if the sample has more than a small trace.

Nima launched the portable gluten sensor in January. The starter kit retails for $279, which includes one Nima sensor device, three single-use test capsules, a charging cable and a carrying pouch. Nima also offers several packages of single-use capsules for a range of prices, from $60 to $120 — or roughly $5 to $6 per capsule — with greater savings (up to 20 percent) for bulk monthly purchases.

Nima is able to test a wide variety of foods, including soups, dressing, cereal, chips and noodles. It cannot test alcoholic beverages and non-food items, and it can’t detect gluten content in hydrolyzed and fermented foods, such as soy sauce. The way that Nima is able to determine the gluten quantity is through protein detection, which breaks down in these items.

While the development is a welcome one for the gluten-free community, there is a very important message Nima has to make sure gets spread among users: The device is not regulated by government health agencies and is not 100 percent effective in preventing allergy-caused illness.

“Nima is not a diagnostic nor a medical device. It tests a sample of food and gives you more data about that sample,” Yates said. Though Nima can test specific samples, it cannot guarantee that an entire dish is free of gluten. “It’s an extra screen before you eat, but not a guarantee that an entire plate is gluten-free (or in the future, peanut-free, milk-free, tree nut-free, etc.),” Yates said. Nima is a supplement to the precautions gluten-free consumers are already taking to avoid gluten, not a replacement.

That worries food allergy advocates. FARE CEO James R. Baker Jr., MD, said, “When dining out, we feel that there is no substitute for doing due diligence and questioning chefs and restaurant staff to stay safe. Food allergies are potentially life-threatening, and given the disclaimers, it is not clear how these types of devices would be useful.”

Nima’s usefulness to allergy sufferers is not limited to the testing, and there are additional reasons that the gluten-free community is adopting it. Nima also offers an app that enables users to share the test they’ve done with others in order to spread the word about gluten-free restaurants and gluten-full dishes near them.

“Community members want to help each other and share their knowledge,” Yates said. “They upload, share and view test results from others and make more informed decisions about where to eat before they even sit down at the table,” Yates said. They can also provide numerical scores for restaurants based on gluten-free options.

It is a crowdsourced database of gluten-free friendly restaurants, and eventually, Yates said, packaged foods, which is backed by science. And Nima hopes that in the future this data is not only useful to the community but can be leveraged by restaurants and consumer packaged-goods companies to find out where their processes can be improved for customers with special dietary needs.

#FACTS Researchers estimate that up to 15 million Americans have food allergies. This potentially deadly disease affects 1 in every 13 children (under 18 years of age) in the U.S. That’s roughly two in every classroom. The economic cost of children’s food allergies is nearly $25 billion per year.