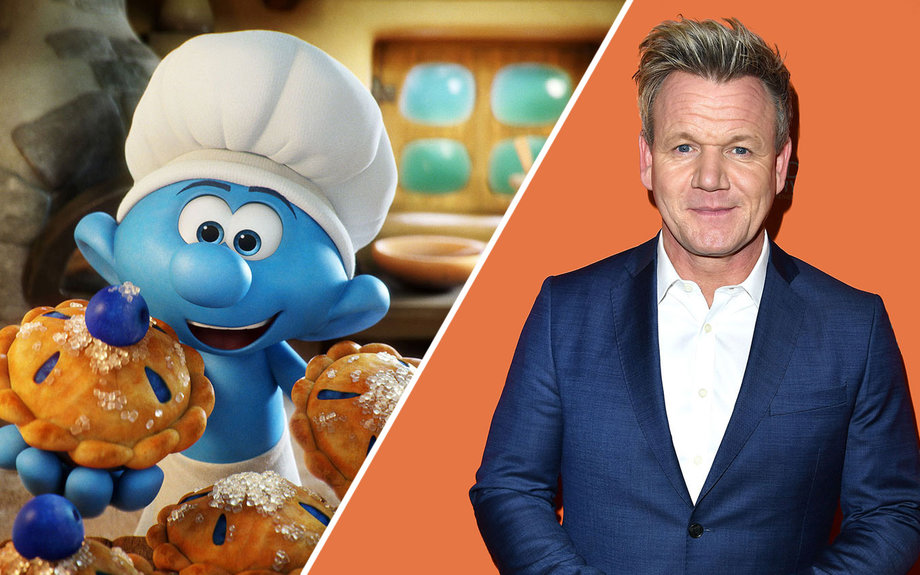 Gordon Ramsay is a lot of things — a chef, a restaurateur, a television host ­— now we can add to that list a remarkable transformation: a Smurf.
Ramsay will make an appearance (vocally, at least) in the upcoming Sony Pictures Animation movieSmurfs: The Lost Village. The fully-animated film is an all-new adventure based on the popular franchise and features the voice talents of Demi Lovato as Smurfette, Rainn Wilson as the villainous Gargamel, and Mandy Patinkin as Papa Smurf.

So, will we hear Ramsay’s signature colorful language when some poor sous-Smurf Smurfs up the Smurfing risotto?

As much as we’d like to see Ramsay as “Sweary Smurf,” it seems the famously volitile and foul-mouthed chef will likely be keeping things pretty clean. As any fan of Master Chef Junior can attest, despite his intimidating demeanor on shows like Hell’s Kitchen, Kitchen Nightmares and Hotel Hell,the chef has a soft spot for kids, and it appears we’ll be seeing that side of Ramsay when he dons (virtually-speaking) a white pants and white… whatever you call that hat that Smurfs wear… as Baker Smurf. Well, actually, Chef Ramsay’s Baker Smurf appropriately gets to wear a chef’s hat.

Ramsay isn’t the first chef to appear in the recently revamped Smurfs canon. The first CGI/live action hybrid movie, released in 2011, featured the voice of Wolfgang Puck as Chef Smurf, and a (real life) cameo by Top Chef judge Tom Colicchio in a party scene.

As chefs have risen to celebrity status, many have made the cartoon/culinary crossover into voice over acting work. Ramsay, along with the likes of Mario Batali, Alton Brown, Anthony Bourdain and Wolfgang Puck, have all appeared on The Simpsons as themselves, and even more chefs have graced our ears playing fictitious characters in movies and television shows aimed at kids.

Smurfs: The Lost Village will make its way into theaters on April 7th.

#FACTS  The Smurfs’ favorite headgear is known as a Phrygian cap. In ancient Rome, it came to signify freedom due to its resemblance with the pileus, a felt cap worn by emancipated slaves. The red Phrygian cap — like the one worn by Papa Smurf — was specifically a symbol of the French Revolution, and during the Reign of Terror, it was used to denote adherence to the violent new regime. Because of those associations, the Phrygian cap was banned in France for a period during the 19th century.