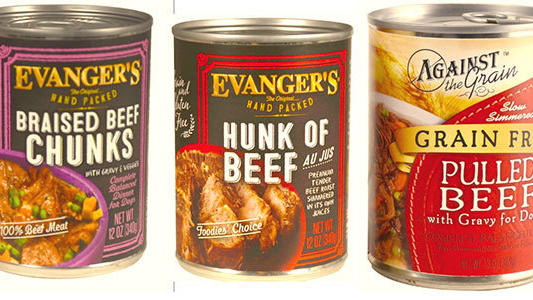 Out of an abundance of caution, Evanger’s Dog & Cat Food is voluntarily expanding its recall of Hunk of Beef and is also recalling Evanger’s Braised Beef and Against the Grain’s Pulled Beef Products due to potential adulteration with pentobarbital.

Oral exposure to pentobarbital can cause drowsiness, dizziness, excitement, loss of balance, nausea, nystagmus (eyes moving back and forth in a jerky manner), inability to stand, coma and death. Consumers who notice these symptoms in their pets should consult their veterinarian.

The 12 oz. cans of dog foods that are being voluntarily recalled have the following barcodes. The numbers listed below are the second half of the barcode, which can be found on the back of the product label:

The three products being voluntarily recalled were manufactured between December 2015 and January 2017, and have expiration dates of December 2019 through January 2021.  These products were distributed online and through independent boutique pet stores nationwide.

This voluntary recall affects only Hand Packed Beef Products, which is a unique method in which large chunks of meat are manually placed into the can by hand, not machine.

Consumers may return any can of the aforementioned products to their place of purchase for a full refund for the inconvenience.  For any questions, customers may contact the company at 1-847-537-0102 between 10 a.m. to 5 p.m. Central Time, Monday through Friday.

Distributors and online retailers were previously notified of this voluntary recall on Feb. 27.

#FACTS In 1860 an Ohio salesman named James Pratt ventured to England to extend sales of lightning rods. While in London he noticed British sailors throwing “hard tack” to stray dogs along the docks. Hard tack is a biscuit made of flour, water, and salt. It was a staple food for long sea voyages and military campaigns. As if struck by lightning himself, Spratt sought the help of a baking firm and his “dog cake” became the first dog biscuit.

With the success of his product among English country gentlemen, Spratt introduced his product to wealthy American dog owners in 1895. In 1907 an American competitor produced a biscuit in the shape of a bone. Until 1922 these two biscuits defined commercial dog food.