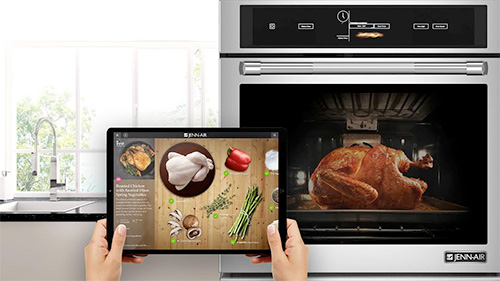 Whirlpool and Innit, a software company that has designed a platform to enable large kitchen appliances to talk to one another and help prepare a meal, have decided not to include that software in a line of Whirlpool-owned appliances, the companies announced this week.

Innit, a Silicon Valley startup founded in 2013, uses its own software with existing technology inside smart appliances, such as cameras in refrigerators and ovens and food recognition technology, to determine what food you have on hand, provide you nutritional info and keep you posted about when the food will go bad, suggest recipes, and tell you how to cook a meal.

The company’s ambitious plans for the smart kitchen caught the eye of manufacturer Whirlpool, and the companies announced their partnership in June 2016. At the time, the plan was to include Innit software in Jenn-Air wall ovens, a luxury appliance brand under the Whirlpool umbrella. The software would allow the ovens to automatically cook a meal based on the weight of the food you’re cooking and algorithms Innit developed, including switching between several of the oven’s cooking modes.

“Both Whirlpool Corporation and Innit are dedicated to delivering meaningful experiences for our consumers in the connected home space,” the companies said in a joint statement. “We have decided to pursue further initiatives independently at this time based on a mutual decision.”

Innit further explained the end of the partnership through a spokesperson: “We completed a successful first phase with Whirlpool – our launch at Pirch last year. While our discussions with Whirlpool continue, we no longer have plans to be involved in the Jenn-Air 2017 launch. We are now opening our platform to multiple manufacturers.”

The end of one partnership between a large appliance manufacturer and a startup probably doesn’t impact the larger trend we’ve seen of big companies looking to the little guys to make better smart kitchen products. With a few exceptions, manufacturers have had a hard time creating smart kitchen appliances that work well and make your kitchen life easier.

Smaller software companies, however, are generally more nimble and knowledgeable when it comes to making a better experience when you interact with a smart product. For example, Bosch announced last year that it would use software from the company Drop in its Series 8 oven that will adjust the oven’s cook times, temperature and humidity levels via Wi-Fi, based on recipes you select through an app. It’s safe to say we’ll continue to see these kinds of partnerships between manufacturers and startups, despite the dissolution of the Whirlpool/Innit deal.

#FACTS In 1948, The Nineteen Hundred Corporation (Whirlpool Corporation) successfully launches the first Whirlpool® brand name automatic washing machine— transitioning the company from a manufacturer with one major trade customer (Sears) to launching its own branded appliances. Dual distribution—one line of products for Sears, another for The Nineteen Hundred Corporation under the Whirlpool® brand begins dual manufacturing and distribution— fundamental for future growth.