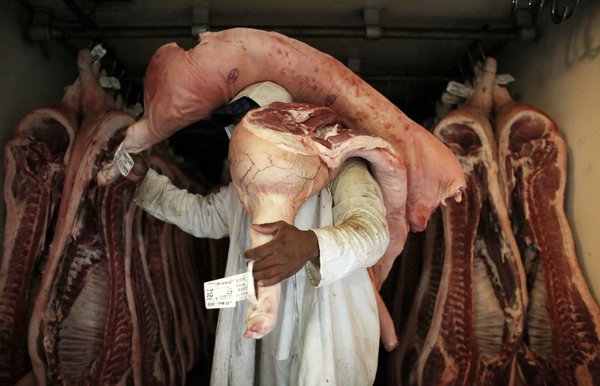 RIO DE JANEIRO — Federal agents raided the operations of Brazil’s largest food companies on Friday over accusations that their employees oversaw a scheme that included bribing inspectors to allow rotten meals to be served in public schools and salmonella-contaminated meat to be exported to Europe.

The investigation by Brazil’s Federal Police, an agency similar to the F.B.I., deals yet another blow to the country’s business establishment, which is struggling to recover from colossal graft scandals around Petrobras, the national oil company, and Odebrecht, a huge construction company.

In the newest corporate scandal, investigators said that employees at two food-processing giants, JBS and BRF, paid federal inspectors to ignore the adulteration or expiration of processed foods. Inspectors also falsified sanitary permits, and bribes were channeled  to the Brazilian democratic movement party of President Michel Temer, according to the authorities.

Rafael Cortez, a political scientist at Tendências, a consultancy in São Paulo, called the meatpacking inquiry “one more element that will add to the picture of political instability.” Brazil’s political establishment was already reeling from an array of other graft cases.

The meatpacking investigation also casts doubt on Brazil’s agribusiness industry, a relatively resilient pillar of the nation’s weak economy. JBS is one of the world’s largest meat producers, with the United States chicken processor Pilgrim’s Pride among its foreign subsidiaries. BRF is a major exporter of meat to the Middle East and Asia.

Companies caught up in the investigation, which also includes smaller meatpacking businesses, were accused of delivering cash bribes in plastic containers alongside prized cuts of beef like picanha, or sirloin cap.

At the same time, the authorities said, inspectors turned a blind eye to practices like exporting meat contaminated with salmonella to Italy, raising the prospect that Brazilian meat exports could face restrictions in important markets.

Investigators said BRF sold a product labeled turkey sausage that had chicken and soybean protein substituted for much of the turkey, and that it adulterated expired meats with a type of acid that investigators said has been linked to cancer. These products were then sold to schools in the southern state of Paraná.

“Children in the public schools of Paraná are eating meals made of expired, spoiled meat or even carcinogens in order to bolster the interests of this powerful criminal organization,” Maurício Moscardi Grillo, a federal investigator, wrote in his description of the case.

BRF said in a statement that it was cooperating with the authorities and insisted that its products posed “no risk” to consumers. JBS said that its headquarters in São Paulo were not targeted in the raids, and that it “vehemently repudiates” the adulteration of its products.

Brazil’s ministry of agriculture said that more than 30 of its employees were removed from their posts as a result of the investigation.

“This is a tremendous blow for us,” Blairo Maggi, the agriculture minister, told the newspaper Estado de S. Paulo, emphasizing that his greatest concerns were “the image of Brazil abroad and the loss of confidence of our consumers.”