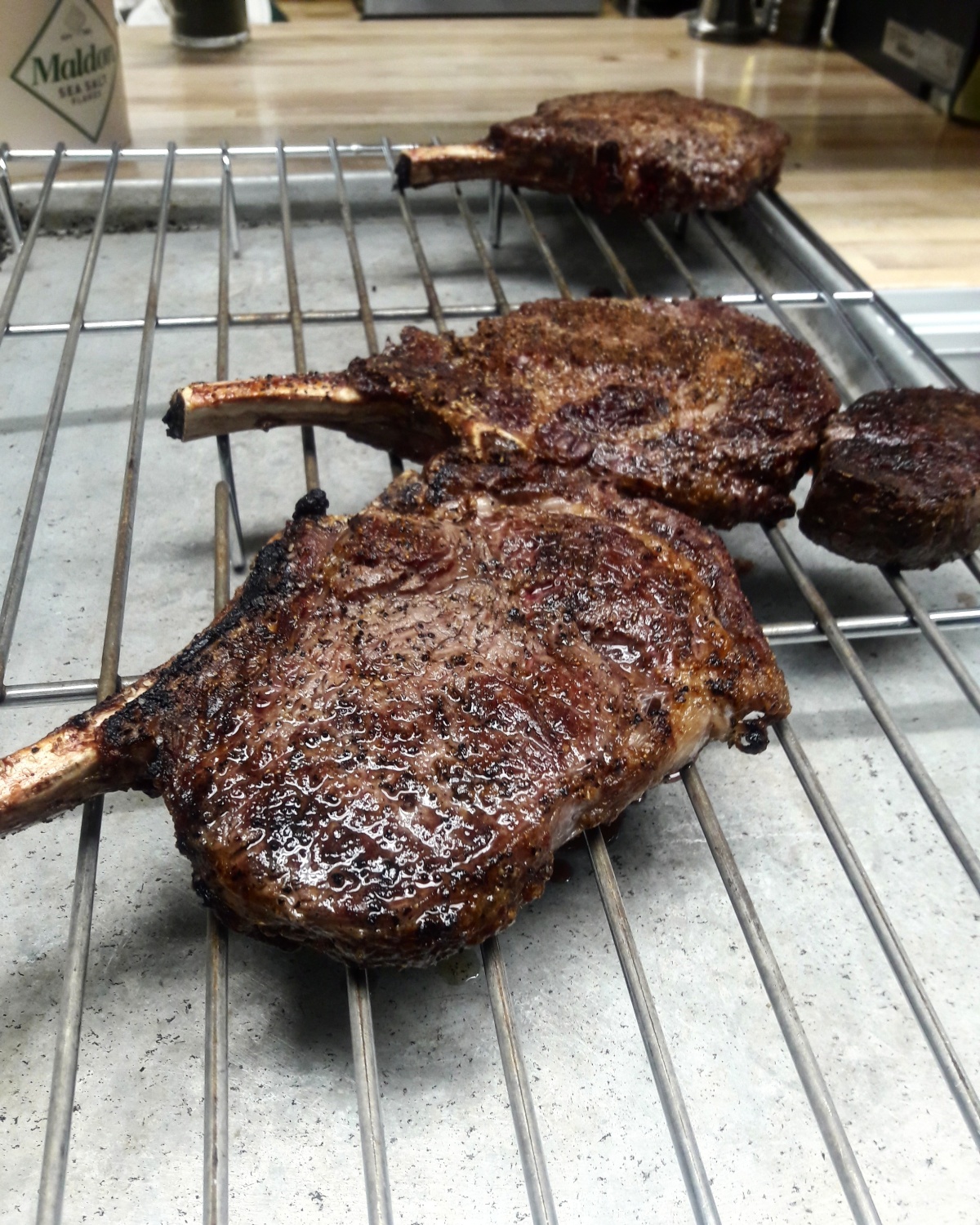 Sure, you love steak and know all the best steakhouses, but are you a true connoisseur?

We spoke with New York City’s Old Homestead Steakhouse team (including owners Greg and Marc Sherry, and executive chef Oscar Martinez and his culinary team), as well as executive chef David Nichols at the Gerber Group and executive chef Paul Niedermann at BLT Prime Doral in Miami on the steak knowledge that separates the men from the boys.

Keep reading to see their answers.

A porterhouse steak and a T-bone steak are not the same. Though they look almost identical, both are part sirloin and filet mignon, and both are double-cut, you get more bone

Filet mignon doesn’t have to be aged.Because it’s so lean, there’s no fat to break down, making the process unnecessary.

The rump is underrated and supremely flavorful. Just because the rump is a tougher kind of meat doesn’t mean you shouldn’t order it. It’s more flavorful than filet mignon and one-third the price.

Don’t be afraid of overseasoning, especially if you’re grilling. Niedermann, the executive chef of BLT Prime Doral in Miami, says most of the heavy seasoning will fall off onto the fire anyway. Better to have more flavor than less flavor. Salt steaks 45 minutes before you sear them. Most people know that steakhouses slather their steak in salt to get that charred, crusty exterior that seals in all the juices and flavor, but give yourself enough time for it to properly set. “Besides the salt adding flavor, it draws moisture, which causes the salt to dissolve,” Old Homestead Steakhouse executive chef Martinez told Business Insider. “Letting the salted steaks sit for at least 45 minutes allows the moisture to return into the meat. The salt makes a sumptuous crust on the exterior when it hits the grill.”

Make sure your heat source is hot enough. Give your grill or pan plenty of time to preheat and test the heat before putting your meat on. If it’s hot enough, you shouldn’t be able to hold your hand over the grates for more than two seconds.

On the subject of heat, thicker steaks require lower heat than thinner steaks. This one makes sense when you think about it: Cooking a thicker steak on high heat will cause the exterior to burn before the inside has cooked enough.

Grilling your steak will give you the best results. According to Nichols, executive chef at the hospitality and nightlife company Gerber Group, grilling retains the best flavors in the meat because it is a slower process and the coals allow the meat to heat evenly.

And if you are grilling your steak, don’t touch it if it’s sticking to the grill – that means it’s not ready to be turned. Be patient and touch your steak as little as possible to keep all the juices inside.

Use tongs to handle steak. Never use a fork, which pierces the steak and causes the meat to lose juice and flavor. The less you touch and poke the steak, the better it will be.

Sear both sides of steak on high heat first before cooking. Place your steak directly over a flame for two minutes on each side, and then cook the steak off the flame until it’s done. This will seal in the moisture and make steaks extra juicy.

Let your steak rest for half the amount of time you cooked it. This will let the juices retract and stay inside the meat, not on the plate.

Only a few New York steakhouses still have prime rib on the menu.Most have removed the menu item because it’s too expensive to feature and what isn’t sold at the end of the night has to be tossed.

Dry-aged steaks are more expensive because of mold and moisture loss.When meat is dry-aged, it’s stored in temperature- and humidity-controlled refrigeration for three to six weeks as the moisture evaporates and the fibrous connective tissue that holds the cow’s muscle together breaks down, giving it a softer texture. A thin layer of mold often develops as well, and that is trimmed before cooking. Couple that with the moisture loss (about 20%), and the beef will weigh less than when it was first bought.

Restaurants pay for the beef preweight loss though, which means as a customer you’re also going to pay more for your dry-aged steak.

The cost of beef rises when there’s a drought. No water means less grass, which forces farmers to purchase more expensive grain-based feed, like hay or corn.

Memorial Day – not the Fourth of July or Labor Day – is the biggest day for beef. The other two holidays tied for second, according to Old Homestead Steakhouse.

28% of people who order a steak get a baked potato. But really you should try a more classic side, like creamed spinach or a hash brown potato cake.

Love steak, but not sure what to order? Follow this guide from Old Homestead Steakhouse: If you want melt-in-your-mouth tender, order filet mignon; tender but slightly chewy, order a sirloin; extremely juicy and flavorful, order a rib eye; can’t make up your mind, order the porterhouse (which is part sirloin, part filet mignon).