The numbers are as shocking as they are appalling. 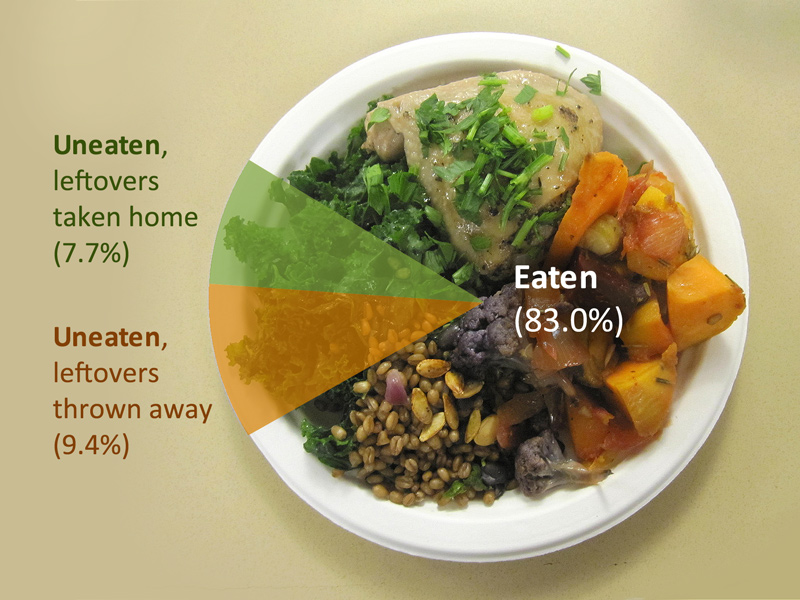 At a time when one in eight families in America struggles to put dinner on the table, a whopping 40 percent of the food produced in the country never gets eaten.

Some of it rots in the field before it can get harvested or gets lost or damaged during processing and packaging; other food items get tossed on the way to market because they’re too ugly to be displayed in the grocery store. Thousands of pounds of leftovers end up in the trash because by the time we remember they’re in the fridge, they’re moldy.

Confusion over food labels only adds to the problem.

If you don’t know the difference between “best by,” an advisory that simply means the product will taste best up until that date, but is still edible a few days after, and “sell by,” a date that helps stores keep track of inventory that needs to be bought by a certain time, you are not alone. Labels can be so tricky to negotiate – they vary from state-to-state or even manufacturer-to-manufacturer – that 90 percent of Americans throw away food that’s perfectly edible. Twenty percent of the food we buy never gets eaten.

“People assume food labels are federally mandated, but they’re not, other than for baby food,” notes JoAnne Berkenkamp, a senior advocate in the Food & Agriculture Program at the Natural Resources Defense Council, an environmental activist organization. “They also widely assume the dates means the food is no longer safe to eat, and that is almost uniformly untrue. They just indicate when the food is at its freshest.”

All told, we toss more than 23 pounds of food per person per month at home and in restaurants, or 35 pounds per person if you add in food retail. That’s more than 45 bananas or two whole turkeys per capita, and that doesn’t even reflect the additional losses in distribution, food manufacturing and farming, Berkenkamp notes.

America hasn’t always been so wasteful. In the 1970s, we threw away half as much food. But as more people entered the workforce, lifestyles began to change. Americans began eating out more as schedules became busier, and instead of one big meal shared by all, families prepared multiple meals, increasing the amount of food purchased and wasted.

Portion sizes also have steadily increased over the past decades, and it’s become more socially acceptable to throw out food. “And we love BOGOs and big packages,” says Berkenkamp – even if it’s totally unrealistic that we’ll actually consume it.

As a result, the average family of four throws out $1,500 of food each year, to the combined annual tune of $165 billion.

In home kitchens, fruits and vegetables get wasted the most (52 percent) because they’re perishable and “are not the most convenient foods to cook,” Berkenkamp says. We also toss half of all seafood, and close to 40 percent of grain products. When it comes to meat and dairy products, we are a little more careful, wasting about 20 percent of each. To put this in perspective, it’s enough food to feed 25 million Americans, according to a 2012 NRDC issue paper – or the entire population of Texas.

“Consumers aren’t great planners,” says Beth Vallen, an associate professor for marketing and business law at
Villanova University. “We over-buy for a lot of reasons, and then are optimistic we’ll eat the foods we buy.”

People don’t realize how much money they’re wasting because food goes in the trash a little here, a little there. But when you quantify the number to people, Vallen says, “they’re shocked.”

Many also don’t understand the vast amount of natural resources that are required to produce the food we’re wasting: Getting food on the table eats up 50 percent of all our country’s land, 80 percent of its freshwater, and accounts for 10 percent of the U.S. energy budget.

Diners tend to waste less when they understand the harm it inflicts on the environment; for instance, food scraps rotting in landfills accounts for about 16 percent of all U.S. methane emissions. So education is key in changing consumer behaviors.

If, for example, you don’t care about how your apples look, orchard growers don’t have to throw away as much, Vallen says.

When it comes to commercial food waste, transportation issues, limited storage and insufficient on-site refrigeration can make it difficult for restaurants and grocery stores to donate leftover food to charities. But where there’s a will, there’s a way, and it comes with a blessing from the government. The Bill Emerson Good Samaritan Food Donation Act, enacted by Congress in 1996, protects food donors from civil and criminal liability should a giveaway later cause harm to its recipient.

Start-ups such as 412 Food Rescue are making it possible to get perishable fruits, vegetables and dairy to people in need. Working with volunteers, the Pittsburgh nonprofit “rescues” food that can’t be sold, but is still edible, and delivers it to community organizations throughout Allegheny County for distribution. To date, the organization has rescued about 1 million meals.

“We all know that hunger exists, but most conversations are about how we can make more food,” says co-founder Leah Lizarondo, “But if you look at what we’re throwing away, it’s more than enough to feed the one in seven people who are food insecure more than four times over.”

When it comes to tackling food waste, the spirit on Capitol Hill has been very nonpartisan and enthusiastic, Berkenkamp says. There is legislation in both the House and Senate to develop a better system for food labeling, and members are working on strategies for food recycling. The Food Date Labeling Act of 2016, introduced last May, would establish a uniform national system for date labeling that distinguishes between when a food is unsafe to eat and when it is past peak quality for consumption. It also would ensure that food is allowed to be sold or donated after its quality date.

And in December, the U.S. Department of Agriculture’s Food Safety and Inspection Service revised its guidance on date labeling, encouraging manufacturers to use a “Best if used by” date label instead of “sell by” or “use by” because that phrase is easily understood by consumers as an indicator of quality, rather than safety.

In the meantime, there are simple things people can do to cut down on food waste and in the process, save money. If consumers plan meals better and go to the grocery store with a shopping list, they won’t buy things they won’t use. Learning to store food correctly also can greatly reduce throwaways as can learning how to pickle foods and starting a love affair with your freezer. “It’s so underutilized,” says Berkenkamp. “But it can be our best friend because it preserves food until you’re ready to use it.”

Conducting a “waste audit” every few weeks also will help to pinpoint what is being wasted, and why. Websites such as savethefood.com and stilltasty.com provide tips on how to store food and whether it is edible.

Increased public awareness and adjustments in consumer behavior really can prompt change. Berkenkamp points to the Love Food Hate Waste campaign in the United Kingdom as an example. Since its launch in 2007, it has successfully reduced food waste by about 20 percent – saving more than $4 billion a year compared to 10 years ago, and 4.4 million tons of carbon dioxide, or the equivalent of taking 1.8 million cars off the road.

“Retailers there have really embraced efforts to educate consumers, and position themselves as sources of information for consumers to get the most out of their food dollars,” she notes.

And in the United States?

“We want people to feel empowered to take action,” says Berkenkamp, “and be part of the solution.” 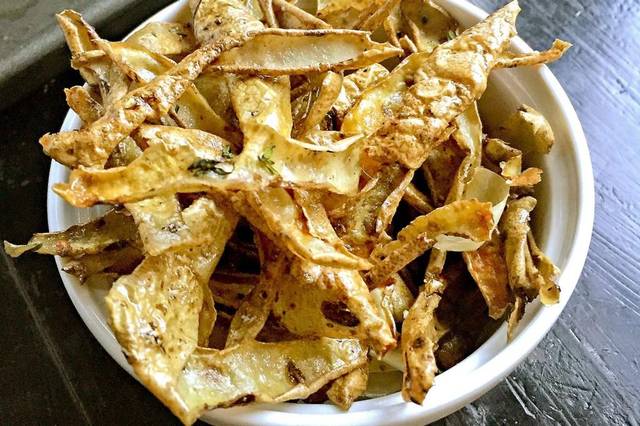 Yes, the skin from peeled potatoes is perfectly edible, and yes, they make a terrific snack when tossed with a little olive oil and roasted in the oven. I used fresh thyme but you could substitute dried. The croutons also are delicious with a sprinkling of cumin or curry powder.

3 teaspoons of fresh thyme, or to taste

Toss potato peels and garlic cloves with oil and thyme; add salt and pepper to taste. Arrange in a single layer on a rimmed cookie sheet. Roast until crisp, about 20 minutes, tossing occasionally to ensure even cooking.

Remove from oven and immediately toss with cheese. Use croutons to top salads and casseroles. Can be stored in an airtight container for up to 1 week. 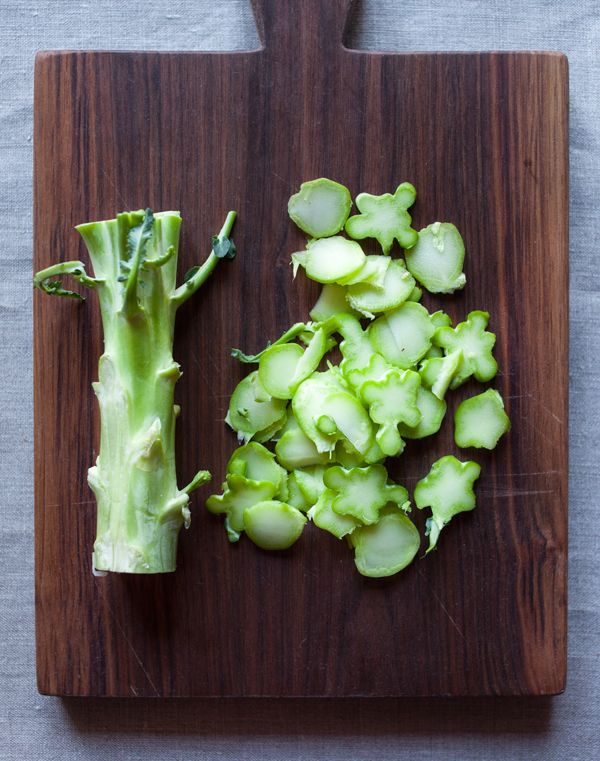 These pickled broccoli stems are a perfect nibbler for cocktail parties, and completely addictive.

Peel broccoli stems and cut them into 1/8-inch-thick slices. Toss the stems with salt in a jar and refrigerate overnight. In the morning, pour off the water that has accumulated in the jar.

Add garlic, vinegar and oil to the jar, stir well and refrigerate for several hours. These keep for a week or more, but the color will fade.

This is a super chocolaty and very rich dessert. The riper the avocado, the better — it adds a velvety creaminess.

Scoop avocado flesh into a food processor. Add milk, maple syrup, cocoa powder, vanilla and salt, and process until the mixture is free of lumps and is velvety in texture. Taste and add more sweetener if needed, or add more cocoa powder 1 teaspoon at a time for more chocolate flavor.

Serve plain or with one of the toppings. Mousse will keep at least 1 week in the fridge in an airtight container.

Breathe new life into leftover spaghetti by turning it into a sliceable pie. There are as many versions of the dish as there are cooks – while some like to layer the top with sauce and mozzarella, I prefer to toss the cooked noodles with sweet Italian sausage and fresh chopped tomato.

About 1/4 cup milk or light cream

Preheat over to 350 degrees.

Heat olive oil in an ovenproof, non-stick pan over medium-high heat. Add pasta, season to taste with salt and red pepper flakes, and turn to coat until warm.

In large bowl, whisk eggs and then stir in cheese, milk or cream, sausage and tomato.

Pour warm pasta into bowl with egg mixture, and toss to combine ingredients. Pour spaghetti mixture into greased 10-inch pie plate; push noodles up onto the sides and bottom to form a crust. (I pressed the mixture into a springform pan.) Sprinkle with additional Parmesan, if desired, and bake for 25 minutes.

This is one of the oldest handwritten entries in my decades-old recipe book. It was handed down from my mother, who got the recipe from an elderly neighbor in her hometown of Oil City. It’s delicious warm from the oven, toasted with butter, or at room temperature.

In large bowl, cream sugar and shortening together. Add eggs, and beat until light and creamy. Add mashed bananas, and mix to combine.

Fold in flour, baking soda and salt. Mix well to combine, then pour into a buttered 9-by-3-inch loaf pan.

Bake for 1 hour, or until top is crispy brown and cake tester or toothpick placed near the center of the loaf comes out clean.