Jermain DeFoe has credited a recent switch to a vegan diet as being partly behind his continued excellence at the top level as the Sunderland striker seeks to maintain his form and remain in contention within the England set-up following his goalscoring return to the national side.

The veteran forward, recalled by Gareth Southgate, marked his first England appearance in three and a half years with a 20th international goal against Lithuania on Sunday and departed Wembley having claimed the sponsors’ man of the match award. That bottle of champagne was wasted on him, with the 34-year-old long since teetotal, but Defoe’s desire to thrive in the top flight has prompted him to explore diet and recovery techniques in an attempt to retain his edge.

He has used ice chambers at his own expense and, since Sundèrland purchased a cryotherapy unit, at his club. “The way the game has gone, the demands on the players are so high given the intensity of games but, with advances in sports science, if you do things right and look after yourself then you have a chance,” he said. “The key thing for me is recovery, giving yourself the best opportunity to perform in the next game, and I seem to have got that down to a T. There’s a lot of things I do away from training and away from match-day that help me perform, so I’ll just keep doing that.

“I have a better understanding of my body now. When I’m at the club I know what days I need to have a rest day. Everyone knows I do a lot of that cryotherapy stuff. It’s not enjoyable but it’s a matter of trying to do it like you’re loving it. Everyone wants to feel fresh in the game – there’s no better feeling – so I just make sure I’m doing the right things and trying to tick every box: cryotherapy, massage, eating the right things … I’m trying to turn vegan. That’s a funny one because, when I go to my mum’s, she’s got every kind of meat you can imagine out on the table. 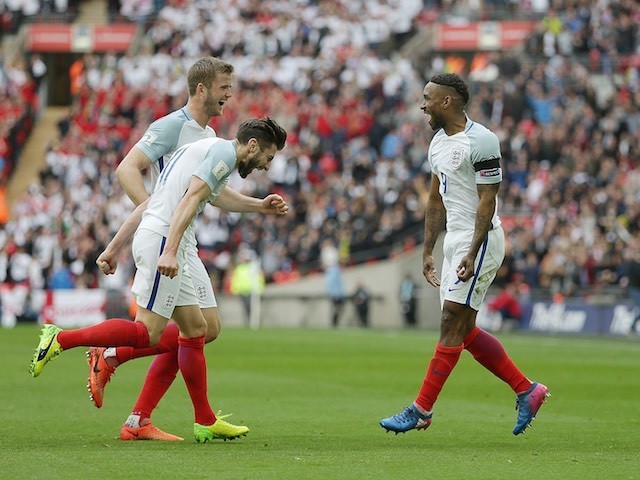 “I think I’ve managed [to adopt veganism] successfully. My girlfriend suggested I gave it a go. Well, she said to me: ‘You’ve got to do it’ and she’s always showing me documentaries on it. It’s always nice to have someone around you who helps you and drives you on and wants you to do well. I don’t find anything hard to give up, as such, because I know the feeling scoring goals gives me. So, while getting in an ice bath isn’t nice, I just think: ‘You know what? I’m going to do this and be rewarded.’ It’s hard but in another way it’s easy because all I want to do is play well and score goals.”

“Even when I joined Toronto [in Major League Soccer], I never once thought: ‘I’m going to retire from international football.’ That move was something I enjoyed and have no regrets about. I’d never given up on England. In my mind I’ve always tried to be realistic but with the previous manager [Roy Hodgson] I didn’t feel like I was going to get an opportunity. I was scoring goals, especially last season, and I wasn’t selected for the Euros, so it was heartbreaking because I felt I’d done enough to be involved, if only just to be with this bunch of players and have an opportunity to play with this sort of quality. But I didn’t get even a five-minute phone call. I found out the squad on the telly. But Gareth phoned me and, as a player, you appreciate that.”

Southgate has already suggested Defoe, who will be approaching his 36th birthday as the World Cup takes place, can play a part at Russia 2018 if he maintains his goalscoring form in the top flight. Certainly the younger members of the national squad have gained from his presence within the set-up over the last 10 days.

“We were having a joke earlier in the week about what he was doing when I was born,” said Dele Alli, who was seven when Defoe made his England debut against Sweden back in 2004. “He’s a fantastic striker and it’s a pleasure to play with a legend like that. He’s got a lot of experience, he’s a fantastic goalscorer and the boys look up to him. To have a voice like that in the dressing room makes a big difference.”