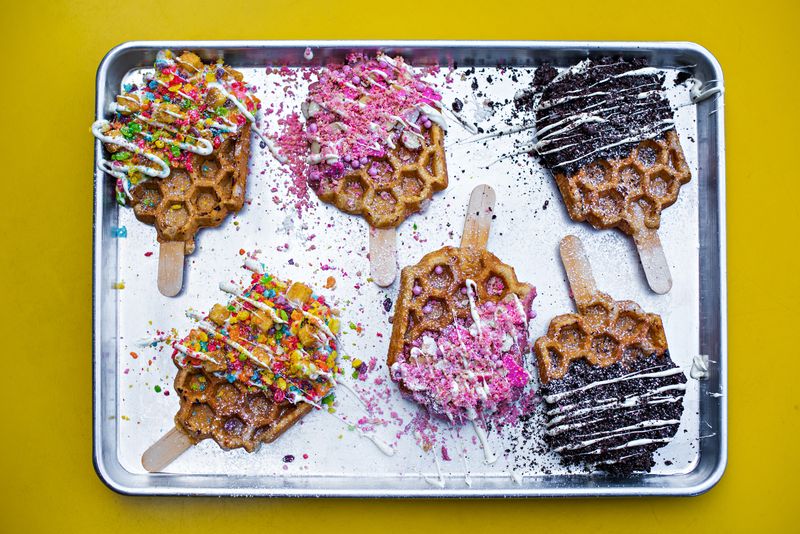 Coachella has returned this year with an immense music lineup and an equally impressive food lineup. They’ve already released the Outstanding in the Field chef roster, but that’s a more exclusive sit-down premium experience.

Here are some quick hits on what you should try at Coachella 2017, plus the complete lineup below.

Danny Trejo’s ultra popular Trejo’s Tacoswill be serving at the Beer Barn, which means it’s accessible to everyone, not just VIPs. And yes, the lines will be long.

The one thing you need to try when you’re out there: Paper Planes, which is Alvin Cailan’s (Eggslut, Luchini Pizzeria) new concept that’s basically melted raclette cheese poured over tater tots. This will surely be the talk of the festival and possibly the most Instagrammable dish for both weekends. Just a caveat: It’s only available inside the Rose Garden VIP area.

Sweet Comforts is a supremely photogenic waffle dessert concept that is debuting at Coachella this year. They come in fruity pebble, Oreo, animal crackers, and “plain jane.” They’ll be serving in the Boardwalk area, which means it’s available to everyone.

Ricardo Zarate’s more fast casual Mamacita, which opened a few weeks ago inside the Hollywood & Highland complex, is serving Peruvian burritos, which come with a quinoa and brown rice blend, tomato sambal, smashed avocadoes, and fried egg with chicken, skirt steak, or portobello mushroom. This will be available inside the Rose Garden VIP.

Marcel Vigneron’s Wolf will be serving everything from burgers and baby kale salad to this incredible coconut nitro ice cream, which should be the perfect relief during the warm spring festival in the desert.

Here’s the full lineup of the food, plus where everything will be located:

The pop-ups this year are three fixed concepts serving a prix-fixe menu with plenty of options that’ll accommodate various tastes and preferences, which is a change from years past. This year, Kindred, a vegan-friendly restaurant from San Diego, makes its debut. Little Sister, Tin Vuong’s ultra popular Southeast Asian restaurant in Downtown LA and Manhattan Beach, will be serving dinners, while Brooke Williamson’s Playa Provisions will round out the lineup. To book a table here, go to this special link on OpenTable. Dinners cost $50 per person.

The general-admission food offerings get a major upgrade this year, including Neal Fraser’s Fritzi Coop fried chicken sandwiches, Koreatown’s ultra-popular Sumo Dog, which originally debuted at Coachella, Roy Choi’s rice bowl concept Chego, and even the delightful Go Get ‘Em Tiger from Larchmont/Los Feliz. Does Coachella boast the best, most unique coffee programs of any music festival? Probably. Oh, and Sweet Comforts will be available to everyone in the Boardwalk.