Imagine going to the grocery store, buying three bags of food, loading two into your car, and mindlessly leaving the third in the parking lot as you drive away. Think you’d never do that? Think again: As Dana Gunders, a senior scientist with the National Resources Defense Council (NRDC) and author of The Waste Free Kitchen Handbook (Chronicle Books, 2015), writes on her blog: “Right now, we’re literally trashing more than one-third of our food supply — an ongoing crime against hunger, the environment, efficiency, and common sense.”

Food waste (or wasted food) is a massive global problem of relatively recent origin. One hundred years ago — maybe even 60 years ago — there was little, if any, agricultural waste; and food didn’t travel thousands of miles in order for a Santa Fe grocery store to sell strawberries from South America in January. The NRDC has a few more sobering statistics: Only 60 percent of food produced in the U.S. is consumed; 20 percent of the food we buy is never eaten; and 90 percent of us throw excess or leftover food away too soon — adding up to about 300 pounds of wasted food per person — a habit NDRC calculates costs a family of four $1,500 a year and places enormous stress on the environment.

“If global food waste were a country,” Gunders writes, “it would have the third-largest greenhouse-gas footprint in the world — ranking right behind the United States and China in terms of how much carbon pollution is generated from its growing, cooling, transportation, and disposal.” Who would have guessed that food in American landfills is a major contributor to climate pollution? “Once buried in landfills,” the NRDC says, “organic waste produces methane, a greenhouse gas that’s far more dangerous than CO2, plus other toxins that can leach into groundwater.”

People who religiously compost the things they find at the back of the fridge may think they are not part of the problem because their stale bread, wilted lettuce, and potato peels never make it into the community waste stream. But as Rachel Cernansky notes on the website Civil Eats, people may “feel less guilty about wasting food if they compost it rather than throw it in the trash. And while that is a better way to manage food waste … composting doesn’t balance out the initial resources used to produce food in the first place.” 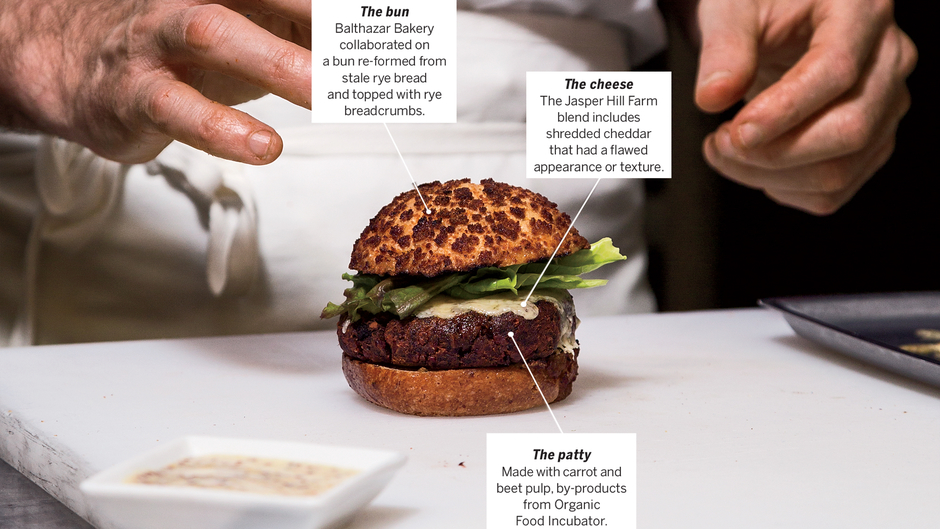 Chefs and restaurants have responded to the challenge to reduce food waste in a variety of creative ways. Fergus Henderson, a London-based chef, helped bring attention back to nose-to-tail eating with The Whole Beast (Ecco), his 2004 “ode to offal” that details how to cook every part of a pig. Santa Fe’s nose-to-tail champion is Josh Gerwin, chef/owner of Dr. Field Goods Kitchen, whose nearby Dr. Field Goods Butcher Shop and Bakery allows him to buy and butcher whole animals in house, serving some cuts in the restaurant and others in the retail shop, while odd bits turn into sausage, bones into broth, and tallow into candles.

Joseph Wrede, award-winning chef/owner of Joseph’s Culinary Pub, acknowledged that there will be some waste in any restaurant, but “waste within the kitchen is a different matter.” Every ingredient has two functions in a good kitchen, he said. First is a starring role in a dish du jour, but equally important are the scraps, peelings, and odd cuts “that play a supporting role in stocks, starters and stews. … Instead of filling a trash bag, the rinds, cores, bones and stems [become] the start of a new day.”

Dreaming of beetroot-pulp burgers with a side of cattle-corn fries? They were on the menu at a pop-up restaurant called wastED in 2015, when Dan Barber of New York’s high-end farm-to-table restaurant Blue Hill at Stone Barns served dishes composed entirely of ingredients headed for the landfill. This winter he reproduced the concept at Selfridges department store in London. His goal on both occasions, he has said, was to encourage chefs to think differently about food waste. In June, Salt & Straw, a popular small-batch ice cream shop in Portland, Oregon, will feature seasonal “rescued foods.” Apple butter made from bruised apples on their way to the bin and whole spices recycled from a local distillery is their first flavor offering.

Making a difference at home

Most of us aren’t equipped to butcher a cow or recycle food scraps on a large scale. What we can do is learn new ways to reduce our household “foodprints” — food-based carbon footprints — by changing the way we shop, cook, and think about food at home. Fortunately, a number of individuals and organizations have stepped forward to help us figure out how long we can keep that homemade Alfredo sauce in the fridge and when we need to pay attention to that “expired by” date — or not. Cinda Chavich, a journalist specializing in food and travel writing, was moved to write a cookbook about food waste after hearing Gunders speak at a conference. “I have been a food writer and journalist for more than 25 years,” Chavich told Pasatiempo, “and she was talking about how much food we waste in North America and its impact on global warming. This was news to me, and I was shocked that I did not know about it.”

Her contribution to the cause, The Waste Not, Want Not Cookbook (TouchWood Editions), published in 2015, was one of three finalists for the International Association of Culinary Professionals award in the Food Matters category. Everyone can help when it comes to food waste, Chavich said, by changing just a few small habits. She suggested “learning to make a few ‘use it up’ dishes with leftovers (stir-fries, soups, frittatas, fried rice, bread pudding, roasted vegetables, etc.), resolving to clean out the fridge/pantry before going out to buy more food, eating food that’s beyond it’s best-before date (perfectly safe to do — food manufacturers recently agreed to change that confusing labeling), buying ‘imperfect’ fruits and vegetables, composting, canning, freezing/storing (with a vacuum sealer), shopping locally, and shopping smart.”

Chavich’s cookbook offers practical help for intelligent shopping. Organized by type of produce from apples to zucchini, her 26 chapters include tips on buying, storing, and serving food, along with a handful of simple-to-follow recipes and suggestions for repurposing leftovers. Six other chapters encourage us to revive the custom of the weekend roast, by preparing a large chunk of protein — such as salmon, turkey, pork, or beef — and then feasting on the leftovers throughout the week.

In 2015, the European Union set a goal to reduce food waste by 50 percent by 2030. In 2016, the Obama administration joined the worldwide effort by also calling for a 50-percent decrease in food waste in the U.S. by 2030; days later, the United Nations released a similar target.

“Our food system is one large, interconnected web,” Chavich said, “and everything we buy, eat, and discard has consequences.” Reducing food waste at home — the lowest hanging fruit on the sustainability tree — is really quite simple. “Buy what you need, and eat what you buy.”