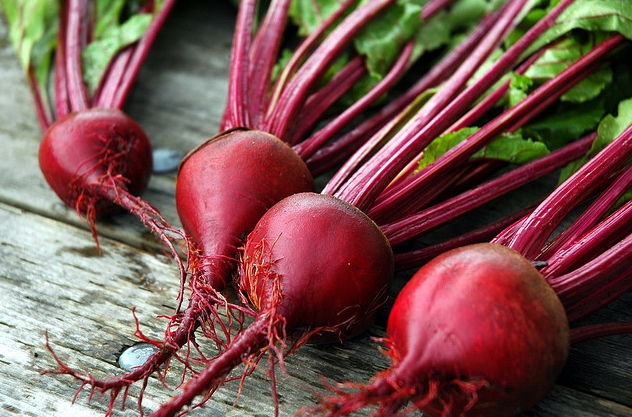 Beets are an ancient, prehistoric food that grew naturally along coastlines in North Africa, Asia, and Europe. Originally, it was the beet greens that were consumed; the sweet red beet root that most people think of as a “beet” today wasn’t cultivated until the era of ancient Rome.

By the 19th century, however, the natural sweetness of beets came to be appreciated and beets began to be used as a source of sugar (reportedly, Napoleon was responsible for declaring that beets be used as a primary source of sugar after the British restricted access to sugar cane).

Today, sugar beets (unfortunately often genetically modified) are a common raw material used for the production of sugar, but many people are missing out on including them in whole form in their regular diet.

There’s good reason to do so, in fact, as beets contain a variety of unique health-boosting nutrients that you may not be getting elsewhere. Plus, they’re delicious!

Beet roots have always been included in my most recommended vegetables list, although they are in the “use sparingly” category because of their high carbohydrate levels.

Although beets have the highest sugar content of all vegetables, most people can safely eat beet roots a few times a week (and their greens in unlimited quantities), enjoying not only their sweet, earthy flavor but also their powerhouse nutrients that may improve your health in the following ways.

The benefit likely comes from the naturally occurring nitrates in beets, which are converted into nitric oxide in your body. Nitric oxide, in turn, helps to relax and dilate your blood vessels, improving blood flow and lowering blood pressure.

If you need a boost to make it through your next workout, beet juice may again prove valuable. Those who drank beet juice prior to exercise were able to exercise for up to 16 percent longer. The benefit is thought to also be related to nitrates turning into nitric oxide, which may reduce the oxygen cost of low-intensity exercise as well as enhance tolerance to high-intensity exercise.

“[Betaine’s]… presence in our diet has been associated with lower levels of several inflammatory markers, including C reactive protein, interleukin-6, and tumor necrosis factor alpha. As a group, the anti-inflammatory molecules found in beets may eventually be shown to provide cardiovascular benefits in large-scale human studies, as well as anti-inflammatory benefits for other body systems.”

The powerful phytonutrients that give beets their deep crimson color may help to ward off cancer. Research has shown that beetroot extract reduced multi-organ tumor formations in various animal models when administered in drinking water, for instance, while beetroot extract is also being studied for use in treating human pancreatic, breast, and prostate cancers.

5.Rich in Valuable Nutrients and Fiber

Beets are high in immune-boosting vitamin C, fiber, and essential minerals like potassium (essential for healthy nerve and muscle function) and manganese (which is good for your bones, liver, kidneys, and pancreas). Beets also contain the B vitamin folate, which helps reduce the risk of birth defects.

The betalin pigments in beets support your body’s Phase 2 detoxification process, which is when broken down toxins are bound to other molecules so they can be excreted from your body. Traditionally, beets are valued for their support in detoxification and helping to purify your blood and your liver.

Eat Your Beet Greens Too

If you simply throw away the green leafy tops to your beets, you’re doing yourself a disservice, as these are among the healthiest part of the plant.
Besides containing important nutrients like protein, phosphorus, zinc, fiber, vitamin B6, magnesium, potassium, copper, and manganese, beet greens also supply significant amounts of vitamin A, vitamin C, calcium, and iron.

Beet greens actually have even more iron than spinach (another leafy green in the same botanical family) as well as a higher nutritional value overall than the beetroot itself. For more details, read “What Are Beet Greens Good For?” You may be surprised to learn, for instance, that research shows beet greens may:

If you’ve never tried beet greens before, don’t let them intimidate you. They can be added raw to vegetable juice or sautéed lightly right along with other greens like spinach and Swiss chard.

There are many ways to enjoy beets:

For an even more intense flavor, try Borscht, or beet soup, which is a traditional Russian dish. This particular recipe below, from Dirt Doctor,also includes homemade broth, making it particularly nourishing and healing.