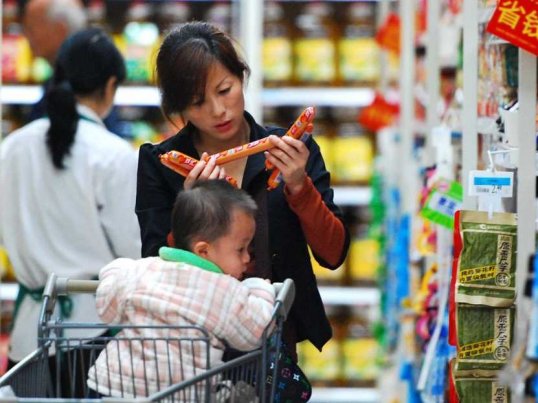 Today’s Chinese citizens have grown hungry for fatty, high-protein foods, but the country’s agriculture industry may have hit its limit.

The Western diet could be to blame.

Over the past two decades, China’s prevailing diet has shifted away from grains like rice and wheat in favor of richer animal proteins and a wider variety of exotic vegetables. As Bloomberg reports, this change has left the country short of land on which to grow produce and raise livestock.

While the Western diet typically demands about one acre per person, China has only 0.2 acres to devote to feeding each citizen. Meanwhile, the country consumes 50% of the world’s total pork supply.

“The rapid rate of industrialization in China is really chewing up crop land at an alarming rate,” Lester Brown, founder and president of the Earth Institute, told Reuters. “China is now losing cropland.”

In an effort to meet the growing appetite for new foods, the country has turned its attention outward. But the solution isn’t as simple as importing more food from abroad – unless the world begins accommodating food production for 9 billion people. Instead, the Chinese government has started leasing farms in North and South America, Australia, and Africa. In some cases, it has bought the land outright.

Launching factories in more industrialized countries has also allowed China to capitalize on newer technology and higher standards for storing perishable items. These efforts help improve the quality of China’s food production, which has been an issue in the past – the Shanghai Food and Drug Administration has had to shut down meat-processing factorieson numerous occasions because they were using expired products.

But even that strategy has its limits.

Population experts predict that an additional 2 billion people will live on the planet by 2050. Many of the biggest spikes in population will be in areas outside of China – developing regions in South America and Africa, in particular – where the country has set up offshore factories for food production.

In solving its own problem, China may inadvertently put much greater strains on the global food supply. Some evidence suggests this is already the case with the grains the country imports to feed cattle, according to USDA research. Producing one pound of beef requires seven pounds of grain, the Earth Institute finds.

Of course, China isn’t the only country adopting a Western diet – it’s merely the latest superpower to do so. The most straightforward way for people around the world to ease the global burden this diet creates is to consume less of the animal protein that requires so much land and water to produce. Even eating other livestock, such as poultry or pork, would ease the demand for feed.

But as China expands its international food operations, the risks of a widening food crisis only continue to build.