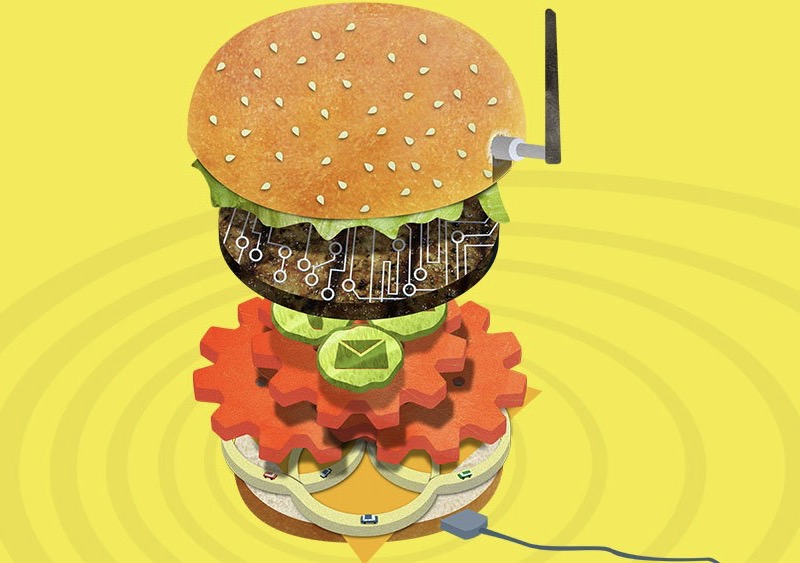 When an UberEats driver heads to Paul Tulaphorn’s McDonald’s (MCD) on Lakewood Boulevard in Bellflower, Calif., a loudspeaker pings sharply, loud enough to be heard over the frappe machine, to let the staff know.

Behind the counter, employees manage those orders via an iPad next to a dedicated register. A designated tech worker helps install that technology, and stands ready to fix a register when it goes down, change over the store’s data-processing systems, or upgrade the “smart clock” that changes the restaurant’s digital menu displays.

Restaurants often lag other industries in adopting new technology, lacking the time or budget for massive digital overhauls. But as industry sales have slowed recently, smartphone conveniences have found their way into the world of burgers and fries. Many in the industry are betting that its future lies in that technology — in large part through mobile orders, payments and delivery.

“We have to be ready,” Tulaphorn, a four-decade McDonald’s veteran who owns nine McDonald’s locations in Southern California, said of the coming technological wave. “And I think we’ll be ready.”

Mobile ordering and delivery from the likes of McDonald’s, Jack in the Box (JACK), Wendy’s (WEN) and Burger King mark the biggest change in the way people order fast food since the drive-thru. As that change ripples through the industry, restaurants are facing down questions like how to preserve margins, avoid parking-lot traffic jams, and keep French fries crispy once they enter the balmy ecosphere of the delivery bag.

Just as the drive-thru accommodated generations shaped by mass-market car culture, the new digital efforts cater to a new cohort of fast-food customers shaped by e-commerce, social media, smartphones, streaming video and, in one way or another, a lack of time.

“We’re currently very optimistic that we’re tapping into a new customer base and serving them in a new way,” Bill Garrett, corporate vice president of delivery at McDonald’s, said in an interview. “It’s a customer that otherwise would likely have not gone out to eat.”

The company is still trying to glean precise details about core delivery customers, Garrett says. He sees “a lot of research” ahead.

Some restaurants have been on the delivery and digital path for a while. Domino’s Pizza (DPZ) and Papa John’s (PZZA) are old pros. Starbucks (SBUX) began offering mobile order and pay in 2014.

The Golden Arches already offered delivery internationally and has dabbled with it in the U.S. This year it has expanded its partnership with UberEats, the ride-hailing service’s food-delivery segment, to major cities like Los Angeles and Chicago. McDonald’s said that as of the end of June at least 3,500 of its 14,000 U.S. restaurants offered UberEats delivery. The burger chain also plans to offer mobile ordering via an app in thousands more locations this year.

So far, McDonald’s delivery customers tend to skew younger, Garrett says. Delivery demand has been spread evenly across the day, though the end-of-dinner, late-night period appears to draw a slightly higher share of business compared to the company’s traditional business. Dunkin’ Donuts, in an email, said its delivery service is popular with millennials and “a younger generation who live in an on-demand world.”

As fast-food chains figure out who these new consumers are, they also have to solve the logistical puzzle that digital ordering can bring to restaurants, which face space limitations in their kitchens and parking lots.

No massive problems have been reported by the delivery newcomers. McDonald’s says its kitchens, drive-thrus and parking lots are able to handle more orders. At the same time, McDonald’s shares are reaching new highs, rising to a record intraday peak of 156.56 on Friday.

But digital orders can come with a learning curve.

Starbucks has said the customer flow at some locations slowed as customers who ordered ahead on its popular mobile order and pay app crowded into restaurants. Management said in April that Starbucks would add staff to its busiest stores at peak times and consider new equipment and layouts to speed throughput. The company was introducing a digital order management system to help baristas track orders with a tablet and notify customers via mobile app when drinks were ready.

Even a few seconds can make a big difference in processing orders and deliveries. The fast-food business, Cowen analyst Andrew Charles said, is “maniacal about drive-thru speeds.” Years ago, then-McDonald’s CEO Jack Greenberg said unit sales got a 1% bump for every six seconds shaved off the drive-thru time.

Tulaphorn says French fries take three minutes to cook and have a seven-minute holding time. When an UberEats driver arrives, the restaurant aims to have orders in the car and on the road within five minutes.

DoorDash aims to deliver within around 20 minutes. That means different things in different areas.

“Manhattan, on a bike, could be 20 blocks or 30 blocks,” said Eitan Bencuya, DoorDash’s head of communications. “In Dallas, Texas, 20 minutes could be five miles away.”

Early on, UberEats drivers sometimes got address numbers wrong, Tulaphorn says. And as with any other change, the new technology requires training for employees and older customers.

McDonald’s initially thought sending drivers through the drive-thru would be best, Garrett says. The company later found it was better to let drivers choose whether to take the drive-thru or go inside the restaurant. In Southern California, McDonald’s restaurant operators can decide whether they want to allocate parking spaces just for UberEats drivers.

DoorDash, meanwhile, found that the drive-thru wasn’t the way to go. “Just by looking at the number of deliveries that we bring to a restaurant, we found that it would actually overload the drive-thru to have Dashers lining up through their cars,” Bencuya said.

Some foods hold up better than others inside a delivery container. Pizza works, and ideally is still cooking when it’s being delivered, Normura-Instinet analyst Mark Kalinowski says. Chinese food, tacos, soups, sandwiches, pasta and salads also hold up fine. French fries, however, are a delicate situation.

At Tulaphorn’s McDonald’s, fries go into a sleeve, then into their own separate bag, then into a bigger delivery bag that’s sticker-sealed to verify that it hasn’t been opened on its way. The UberEats driver also has a thermal bag to carry this delivery bag.

Garrett says the company is looking at packaging changes that might help keep drinks and desserts from spilling, but wouldn’t get into specifics.

Restaurants that work with DoorDash get access to the deliverer’s own packaging. DoorDash drivers can wrap the takeout container in a thin, metallic “space blanket” and put that inside an insulated bag.

McDonald’s cites its massive geographic reach as an advantage. By its own estimates, nearly three-quarters of the population in its top five markets — the U.S., France, U.K., Germany and Canada — lives within three miles of one of its restaurants.

Charles says a place like Wingstop (WING), which has limited seating and already does a lot of to-go business via digital, could be well-positioned for delivery.

Wall Street likely will focus more on the profit impact when the novelty of digital ordering wears off and restaurants gain more sense of who their digital customers are. Commissions paid to third-party delivery services risk degrading margins, so restaurants need to watch their delivery sales trends to justify the hit, Charles says.

Delivery fees also raise costs for consumers. A McDonald’s Quarter Pounder with cheese meal, with a medium Coke and fries, delivered via UberEats to IBD’s Los Angeles office from the Marina del Rey area takes an estimated 20 to 30 minutes. A $4.99 “booking fee” is tacked on to the food charge of $6.89 and 60 cents in taxes, bringing the total cost to $12.48.

Independent restaurants’ sales growth has outpaced that of restaurant chains, a pattern that could continue for the rest of the decade, food-industry consulting firm Pentallect estimated in April. Customers, it said, felt independent restaurants were more community oriented, with better quality, value and service. The trend comes on top of the day-to-day difficulties of competition, discounting and higher labor costs.

“I think that simply put, you’ve got a pretty mature industry out there that’s experiencing periods of weakness,” Charles said. “So essentially operators are looking for: ‘What’s the shiny object out there? What’s the lever I can pull to really get my sales going?’ It increasingly seems like it’s delivery.”