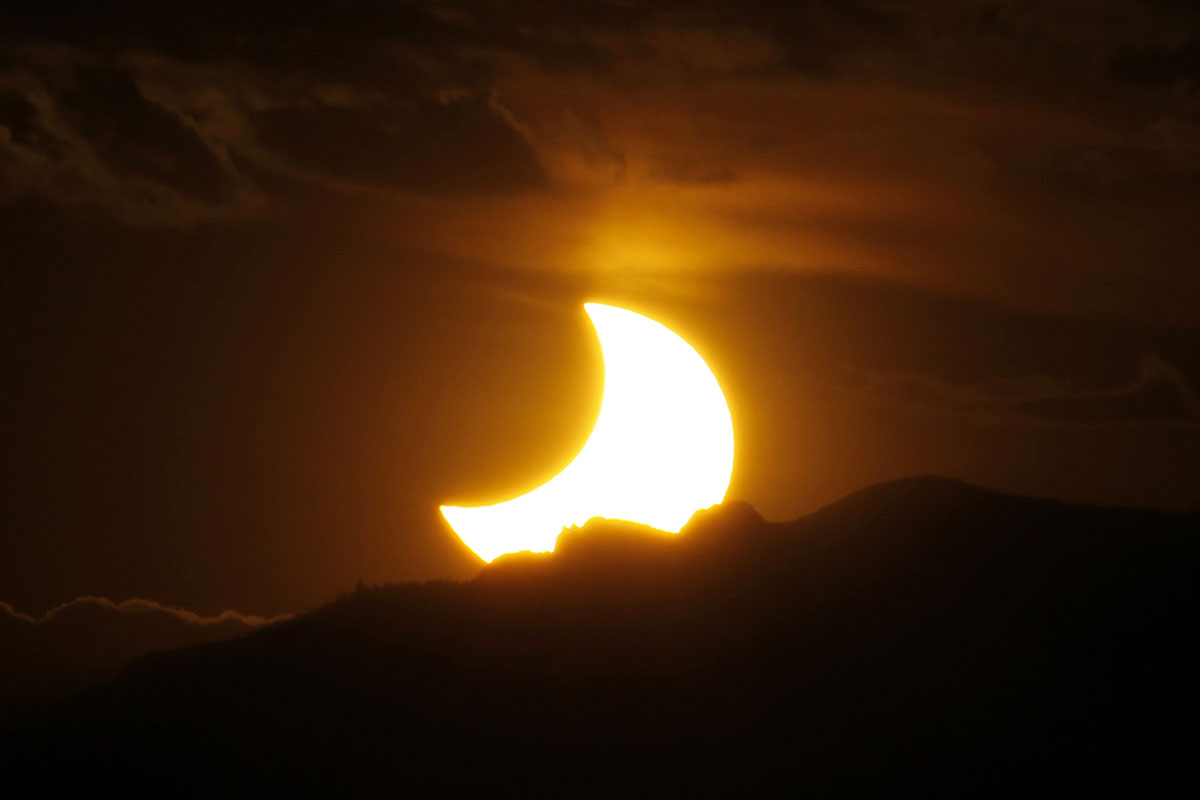 With the sky doing dark from Oregon to South Carolina, the promotions will extend from doughnuts to sub sandwiches. Some could emerge from the darkness with full stomachs.

Deals and gimmicks include:
Krispy Kreme
The Original Glazed Doughnut will be available for the first time with a chocolate glaze on Monday. It also will be previewed on Saturday and Sunday during participating stores’ Hot Light hours, the times when the treats are fresh out of the oven.
Dairy Queen
Dairy Queen highlights another marvel of nature, the blizzard. In this case, it is its own version of a Blizzard. Buy one Monday and get another for 99 cents.

Denny’s
Dig into $4 all-you-can-eat “mooncakes” — moon-shaped buttermilk pancakes. Which is to say they’re round — like a regular pancake.
Firehouse Subs
“Eclipse your hunger.. with an out of this world offer,” the chain puns. Get $2 off a medium or large sub, chips and a drink or $5 off a $50 catering order through Monday.
Shoney’s
On Monday, the Nashville-based family-dining chain with 150 locations in 16 states is giving out free eclipse glasses and free MoonPies with meal purchases while supplies last.
DoorDash
The food delivery company, based in San Francisco, is delivering free half-moon cookies — also called black-and-whites –from 2 p.m. to 4 p.m. Monday in New York City, the San Francisco Bay Area, Los Angeles, Boston and Washington, D.C. There is an Eclipse Cookie Store on its smartphone app.

Pilot Flying J
The gas station and convenience store chain, with more than 750 locations in 43 states and Canada, is giving out free Milky Way bars and packs of Eclipse chewing gum Monday through Friday.
Pizza Hut
The chain has produced an online video showing how to safely view the solar eclipse by making a pinhole projector out of a pizza box.
McDonald’s
The McDonald’s restaurant in Lander, Wy., will roll out its McTruckin food truck to cater to travelers who have come to be in the path of the eclipse. There are also nine curbside pickup points for the occasion.
MoonPie
This one’s a no-brainer. Post or tweet a photo of you having fun on Eclipse Day with the hashtag #MoonPieEclipse and you could win a year’s supply of MoonPies from Chattanooga, Tenn., manufacturer. They’ve already sold out of the eclipse survival kits — two pairs of eclipse-viewing glasses and four mini-MoonPies — they’d been selling on the company website.

Dunkin Donuts
Need coffee to make sure you’re super-focussed on seeing the eclipse? You might be selected to get a $5 mobile gift card.
Chiquita
The fruit company is all about the “banana sun.” Its line-up of celebrations include a Facebook Live stream on thebananasun.com, a series of Web films and a banana-shaped eclipse-viewing glasses giveaway in New York City.