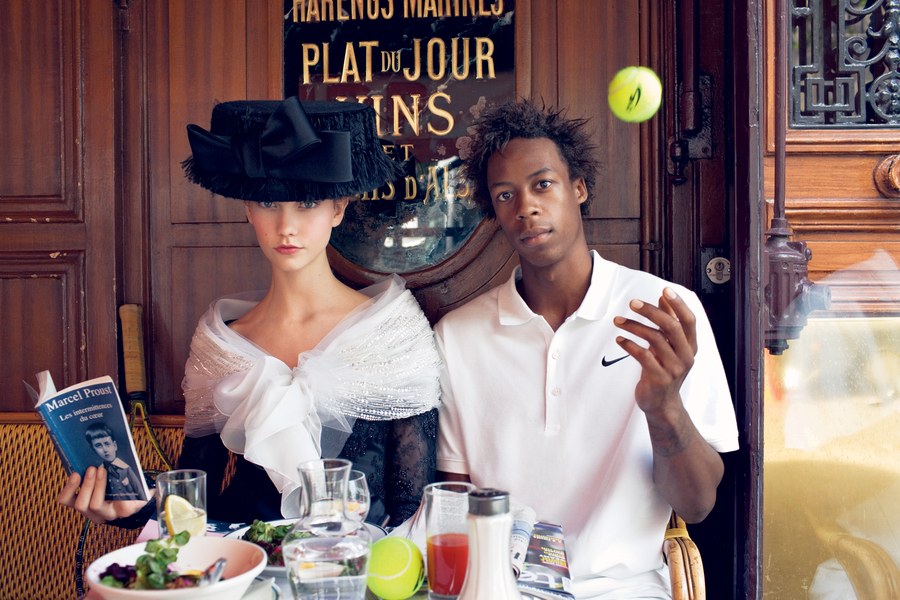 They are at the top of their game, the best of the best, the elite of the elite, and all gathering at New York’s Billie Jean King National Tennis Center from August 28–September 11 for the U.S. Open. No, we don’t mean Roger and Venus—although they’ll be there, too. The other main attraction at the U.S. Open is the fare created by an all-star lineup of celebrity chefs. “It’s food unlike any other sporting event literally in the world. It’s really quite incredible,” says Ed Brown, U.S. Open celebrity chef and U.S. Open culinary consultant. “We have all these really talented partners, of which I’m happy to be one, participating in making it special.”
The lineup of star chefs also includes David Chang, David Burke, Marcus Samuelsson, Josh Capon, Masaharu Morimoto, and Tony Mantuano. Brown says of the lineup, “These are all the biggest name-brand restaurants of New York City and some nationally [that] are out here for two weeks. And it’s not because of any other reason than they want to be there.” And the dishes follow suit, ranging from evergreen favorites like the famous U.S. Open lobster roll (recipe below) to a steakhouse-worthy veal chop to David Chang’s twist on the hamburger. Read on for the chefs’ picks of what to eat at this year’s U.S. Open, and we don’t blame you if you want to linger at dinner and miss that first game (or two).

Samuelsson says of the jalapeño and bacon-wrapped beef tenderloin, “I love soy sauce, and it’s a great way to season beef to get a deep concentration of flavor. To bring in Latin flavors, we wanted to pair that ingredient with chipotle and mole.”

“Our version of creating this dish with a light and flaky fish was to add in some nice acidity with escabeche,” says Samuelsson of the pescado a la plancha.“Then you have some fresh tomatoes and crab with coconut seasoning, which all brings complexity, but in a very balanced way.”

And if you are looking for something extra unusual for a sporting event, go for the short rib ropa vieja. Samuelsson says, “Ropa vieja is a classic dish, and we favor short rib as the main protein. The pineapple adds a nice, sweet touch to the dish, along with the crushed plantains to act as a starch. These flavors and textures play off each other so well.”

Aces
Seafood lovers can head directly to Aces, where Brown is serving up a mix of beloved classics (or “returning champions,” as he calls them) and new plates created for this year’s tournament. Alongside Brown, legendary sushi chef Masaharu Morimoto has designed signature sushi platters for a truly complete seafood experience. Brown approaches the menu at Aces like it’s a pre-theatre dining experience in New York City, making sure it’s “engineered [so] that it can be expedited and produced expeditiously” without sacrificing any quality.
Brown is particularly excited about introducing his kettle chip–crusted Chatham cod (recipe below), which he describes as “a really fun dish of a beautiful piece of Chatham cod topped with kettle chips as the crust.” The ”big, chunky pieces make a beautiful presentation [with] the light mustard sauce and fresh spinach.”
You can also try Chef Masaharu Morimoto’s one-of-a-kind sushi combos at Aces. Morimoto explains, “I enjoy company when I watch tennis games. The ultimate combo for two from Aces restaurant is a perfect size, with a variety of choices of sushi to share with good friends and family.” And Brown echoes the ease of watching from Aces, recounting that “in the last several years, we’ve added TVs everywhere, and so people are having a nice dinner, relaxing with a bottle of wine, great service. They won’t miss one game, one match, because they can see it. And then at break set or at a break game, they could get up out of their restaurant seat and be in their tennis seat in literally 4 minutes.”

Champions Bar & Grill Featuring BLT Prime
Steak-lovers rejoice: “In Champions, where we have Dave Burke, we’re trying to get him to re-create his Dave Burke BLT steakhouse,” says Brown. That means you should look out for beautiful cuts of meat along with Burke’s signature whimsy.

Try the new veal chop, which Burke calls his “light and summery twist on a surf and turf.” He explains the dish saying, “We sear the veal and top it with Laughing Bird shrimp. It’s a nice alternative to one of our classic steak cuts, especially if you’re dining at Champions multiple times during your visit to the U.S. Open.”

Or you can seek out a Burke classic, the “clothes line” bacon. “I’ve been doing this dish for 9 years now—and it’s always replicated but no one can really make it as indulgent and delicious as we can,” says Burke. “The dish is also an Instagram hit—I’ve been making Instagrammable food before Instagram was a thing, so it’s great to see guests share their food photos across their social channels!”

Fuku
Foodie-beloved David Chang is bringing his signature inventiveness at Fuku out to the U.S. Open for the second year with an exclusive dish for this year’s tournament. Brown jokes that “you know [with] David Chang, there ain’t gonna be anything normal about it except that there’ll be meat in it. But we’re really excited that he’s doing that.” The 163 Burger features two Pat LaFrieda beef patties topped with cheese, lettuce, and a special sauce, all on top of Hot Bread Kitchen bing bread.

Lure
Josh Capon is bringing the signature seafood flair of his New York restaurant Lure out to the U.S. Open for the first time this year. And he’s most excited about his version of the Lobster BLT. “Nothing screams Summer time like a perfect Lobster roll,” says Capon. “And we figured since we are at the US Open, the premier tennis event of the year, we had to raise the bar so we decided to add some Applewood smoked bacon and Jersey tomatoes. If that’s not an ACE, then I don’t know what is!”

Wine Bar Food
While new chefs and new dishes are always exciting, there are certain longstanding classics that repeat U.S. Open visitors look forward to every year. Brown puts Tony Mantuano’s ouzo shrimp at the top of that list, joking that if the dish ever left the menu, “people would have a revolution.”