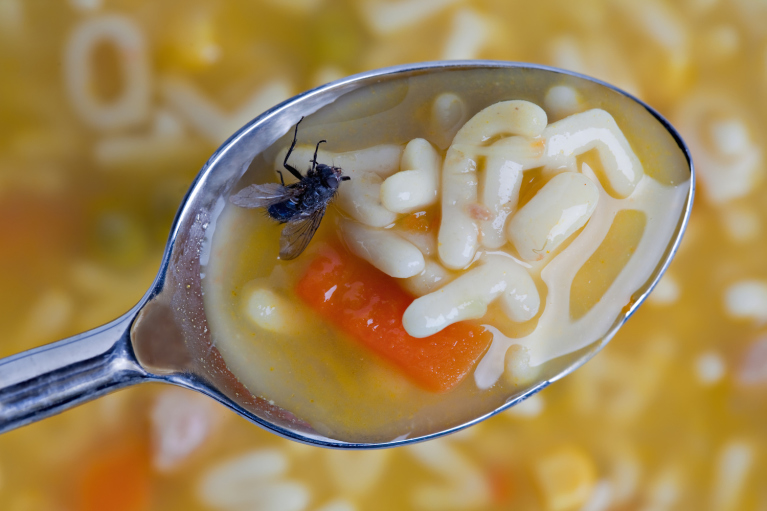 The common house fly (Musca domestica) has no venom, no stinger, and no fangs. It finds its food in a peaceful way—by rolling around in other animals’ waste and garbage. With no teeth, the fly requires a liquid diet. This would be a problem, since a lot of food is solid, but the fly has a disgusting workaround: It spits and pukes on its meal. Compounds in its saliva and bile break down the food, making it as slurpable as a smoothie.

All of this would be gross, but ultimately harmless, if flies only ate soup. But they’re opportunists. They eat rotting garbage and they eat animal feces, and in doing so they consume loads of pathogens.

“House flies are the movers of any disgusting pathogenic microorganism you can think of,” Jeff Scott, an entomologist at Cornell University, told the Daily Mail. “Anything that comes out of an animal, such as bacteria and viruses, house flies can take from that waste and deposit on your sandwich.”

Experts estimate that adult houseflies can transmit more than 100 different diseases and parasites, from Salmonella and tuberculosis to tapeworms.

Does this mean we should immediately throw out any food a fly has touched?

Cameron Webb, a medical entomologist at the University of Sydney, says a quick visit from a pest is nothing to worry about.

“In most instances, spotting a fly on your food doesn’t mean you need to throw it out,” Web wrote in a blog post. “A single touchdown is unlikely to trigger a chain reaction leading to illness for the average healthy person.”

Just the same, you should probably intervene before Ms. Buzz-Buzz does her business on your burger.

“The more time passes,” Webb notes, “the greater the chance of pathogens left behind by the flies growing and multiplying on our food. That’s when health risks increase.”