Georgia has a lot of yummy foods to choose from, but there’s one delicacy locals despise the most, according to a new report. It’s tuna salad.

Hater, a dating app that matches people based on the things they hate, pulled data from its hundreds of thousands of users to round up the cuisine that every state dislikes the most, compared to the rest of the world.

They found that Georgians can’t stand tuna salad, because it’s the most loathed dish for the state.

Other areas had some interesting results. For example, Californians aren’t fans of the Atlanta-based fast food chain Chick-fil-A, and people from Nevada don’t deal with La Croix, the popular sparkling water drink.

Then there were some findings that were more in line with the state’s traditional specialties.

Texans, known for their grilled and barbecue meats, do not like steak cooked well done, and folks from Washington, which is the world center for coffee, stay away from k-cups.

Others were a bit more specific. Residents in Maryland avoid the corner piece of a brownie, and Louisianans roll their eyes at cookies with raisins.

Curious about the other locations? Take a look at the map of findings below. 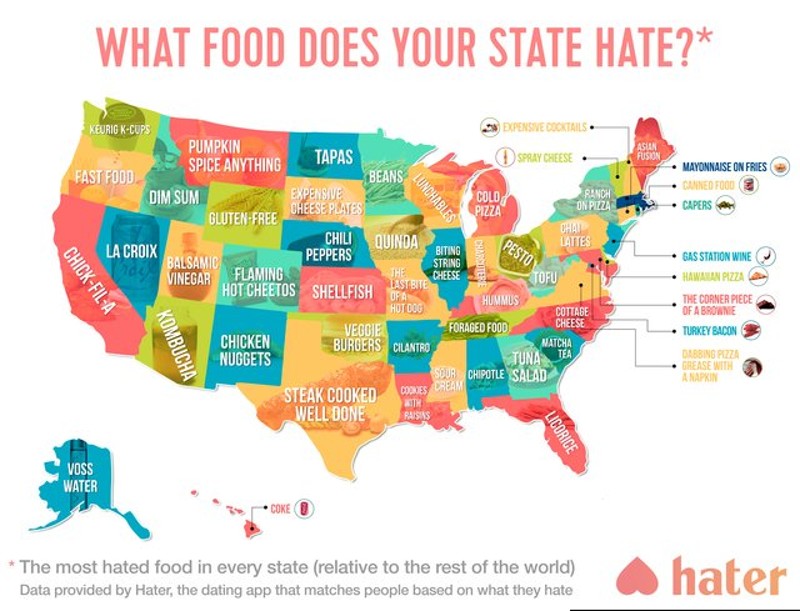